Planning for FPL BGW27: What Differentials should you pick

The next 4 GWs are important in the FPL calendar – with the permutation of blanks and doubles, the selection of a right XI will help managers move up the Overall Ranks swiftly. The reverse is true – a few bad transfers can reap upheaval.

In this blog post we’d be planning for FPL BGW27 and looking at the best the differential picks for BGW27. If you’re also looking for an FPL chip strategy guide too follow for the rest of the season feel free to click here

A quick preview of some upcoming GWs:

We look at 5 differential picks that will make a difference:

At the top of our chart is Saints forward Che Adams.

Other than their DGW on GW28, the Saints have very good fixtures until GW31 and they are the team on form. They have only lost once in their last 9 games, securing draws against the two Manchester sides.

In his last 3 games, Adams have boosted great underlying stats. He scored twice and provided and assist, netting a total of 21 FPL points, the most of any Saints player. His expected goals (xG) is also the highest at 1.32.

In terms of creativity, he is behind several other teammates including Ward-Prowse, who will no doubt be a very popular player in the coming weeks as well.

However, Adams gets my nod as the number one Saints player to have as generally, FPL forwards have not been delivering this season and it will be crucial to select one who is on form.

If you have space in your midfield, Ward-Prowse is the player to get.

Overall, his season has been consistent and steady. He is at 6 goals and 4 assist with more than one third of the season to go, well-placed to match his 15 goal involvements last season (8G | 7A).

Saint-Maximin is the clear favourite of the Newcastle players and already nearing 17% in terms of ownership. He is, however, currently flagged and has a terrible record with injury.

A good alternative Newcastle player to have in your team is GK Dubravka.

Dubravka is the clear number one currently and like the Saints, Newcastle is the team on form, unbeaten now is 6 league games.

He currently averages 3.5 FPL points per game, which is not high in terms of ranking but, Newcastle have consecutive double gameweeks, meaning that he should average 7.0 pts per gameweek, higher than that of Ramsdale, the
highest averaging FPL GK at 5.15pts per GW.

Newcastle’s 4 games across their DGW are against Brighton (H), Southampton (A), Chelsea (A) and Everton (A), none of them are easy games but the Magpies are now a spirited bunch on the back of their good recent form.

Kulusevski was in great form for Spurs on GW26 when they beat City away, providing the last minute cross for Kane’s winner.

His price point is fantastic – 6.0 for an attacking right winger. The only concern previously was his gametime, but the young Swede has played in every game since his arrival, including starting away at City.

Overall in his career, Kulusevski’s stats has been brilliant. He has 16 goals and 16 assists in 97 top flight appearances, which included many coming off as a substitute at Juventus.

His ownership also make him a superb addition, especially before GW29, when Spurs player United and Brighton (both away)

While Raphinha is the highly owned Leeds asset, James’ good recent performances have broadly gone under the radar.

He is also a listed midfielder, but is a out of position player as a left sided attacker, as can been seen by his season heatmap. 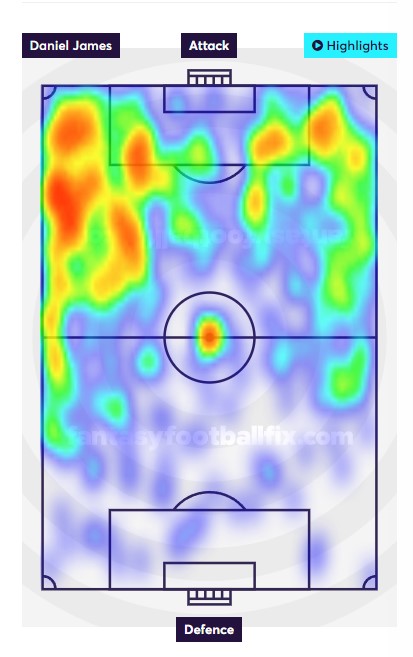 Leeds’ DGW fixtures on GW28 are away at Leicester and at home to Villa. They are desperate for the points and you know they will fight for every game.